When selecting fans as components of a device, ensure that necessary measures are adopted for preventing the device from burning out when fans are stuck and current changes during startup. In this paper, we will study the current of the fan. 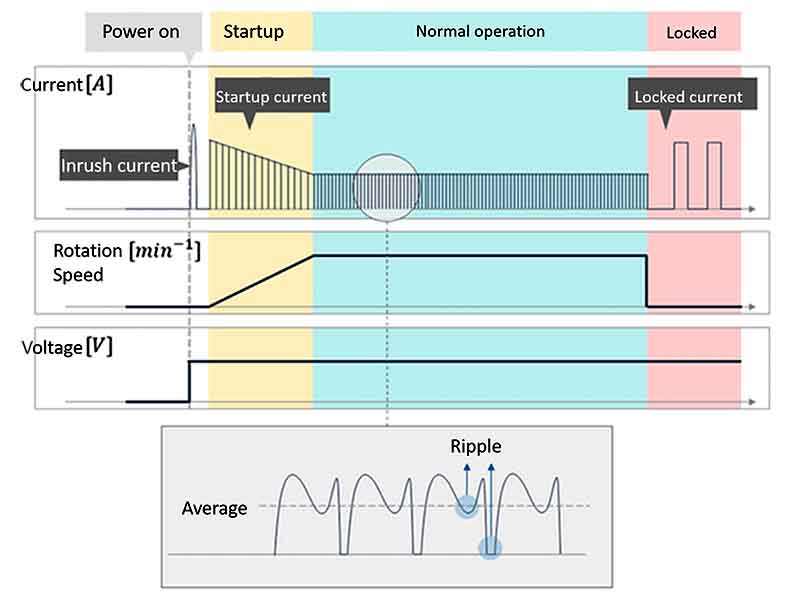 The fan drive circuit contains smoothing capacitors and other components. When the power is turned on, they start charging at once, and a huge instantaneous current flows. This phenomenon is called inrush current.

The peak value of the inrush current is determined by the driving circuit of the fan. It is usually the highest point of the current change, but it only lasts for a short time.

When the fan is turned on, even at low speed, a peak current will be generated. We call it the startup current. The startup current reaches the maximum immediately after startup and then decreases gradually as the increases of fan’s rotating speed.

This is because rotating fans also act as generators and generate power called " counter-electromotive force "(CEMF), which is proportional to the speed.

The length of the startup current varies with the fan, but less than 10 seconds in most cases.

The current at which a fan's rotational speed is stable is called rated current. In addition, due to the influence of counter-electromotive force (CEMF) and other factors, the current contains ripple during normal operation. The rated current listed in the catalog is an average value including ripple, but it has no significant effect on the average value because ripple occurs periodically and the amount is roughly the same.

If the fan blades are restricted by some external factors, a high current similar to the startup current will be generated. In order to prevent fans from burning out due to the high peak current, the "locked rotor burnout protection function" can be equipped to solve this problem well. In DC fans, for example, the current is turned on and off automatically on a periodic cycle using the "current cut-off system" to prevent fans from burning.