The fans we encounter in our daily life vary according to the applications in which they are used. COOLING has a lineup with many types of fans. Let's see how they differ.

Nowadays, DC fans, are the mainstream product, which are easier to control and available in many varieties.

There are also EC fans that can be powered not only by DC, but also by AC. EC fans have a mechanism of converting AC to DC power, and their working model is the same as that of DC fans while using AC power.

Axial fans have always been the most commonly used type.

The axial fans have an impellor installed in the core of the frame, which draws in air and discharges it along the direction of the rotating shaft straightly. When you hear the word fan, This is probably what you think of it. Axial fans often appear in our daily life, with the characteristics of high airflow and low noise.

Axial fans include Counter Rotating Fans (in which the impellers of two axial fans are connected in series and rotate in contrary directions to provide high static pressure and improve the straightness of the airflow), Durability Fans (which can be used in extreme conditions, such as extremely hot or cold environments), and Reversible Flow Fans (the rotating direction of blades can be reversed to realize airflow in both directions). All of these can be selected to meet the needs of your device.

Unlike axial fans, Blowers and Centrifugal fans draw in air from the inlet side and discharge it after changing the airflow direction by 90 degrees.

Blowers and centrifugal fans are ideal for devices where there is not enough space to exhaust air in a straight direction from the appliance. Blowers, due to their high static pressure performance, are ideal for localized cooling applications where the air is blown in a precise manner and used for internal cooling of equipment with high-density of mounted components. Similarly, centrifugal fans are suitable for exhausting air from the inside of equipment with high mounting densities. 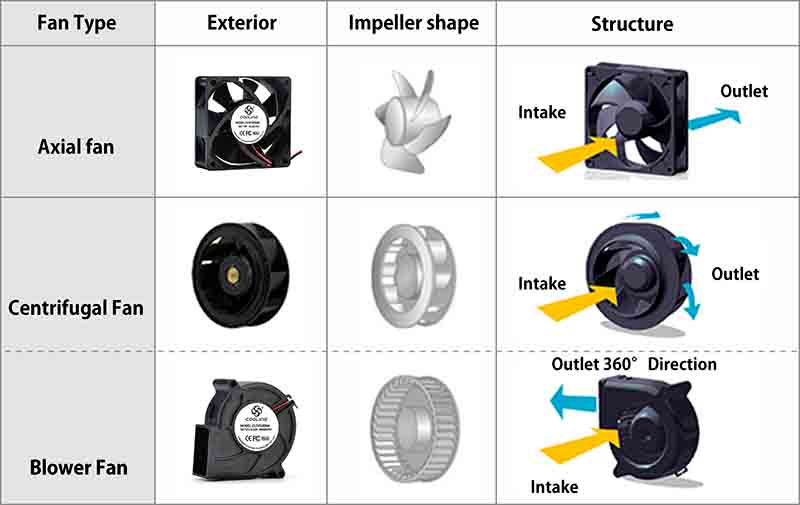